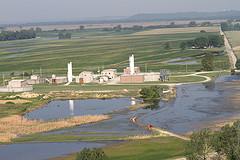 Flooding apartment is one of the most frequent causes of conflict among the residents of apartment buildings. Often, neighbors, due to the fault which occurred bay apartments, denied his guilt, or do not agree to pay the cost reconditioning. The first thing you should do in case of flooding – turn off electrical appliances to avoid closure and to find out the cause of the flood. Flood may occur both because of the negligent / guilty behavior of neighbors (outdoor faucet, clogged drain hole for filling water tanks, etc.), and not their fault (leaky roof of the house, break pipes in the stairwell). Find out the cause, should immediately resolve it, but not Take your time to eliminate the consequences of the flood. Fix the damage caused by flooding, with the camera or camcorder. If guilty, that you are flooded, do not plead guilty or declare that the size of the damage caused is minimal, you make pictures and records will serve as effective evidence.

The next thing to do – call the CSC / CSR and to make the act of inspection of the premises on the fact flooding. This must be done always, even if the perpetrator of flooding initially plead guilty and verbally no objection to redress. It should be remembered that in the future, the situation may change and the guilty party refuses to repair the damage. In the absence of duly executed instrument of flooding to defend their rights would be virtually impossible. Culprit flooding plead guilty, but not have the ability to immediately compensate the damages caused by flooding – we recommend to make an agreement for compensation in writing. The agreement must reflect the fact that a person convicted his guilt in the flooding, as well as certain parties to the size of the damage, order and terms of compensation. By agreement of the parties the payment can be made as a lump sum or in installments (periodic payments).